Did Masters in History from Govt. College
Businessman by profession 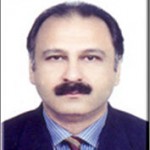